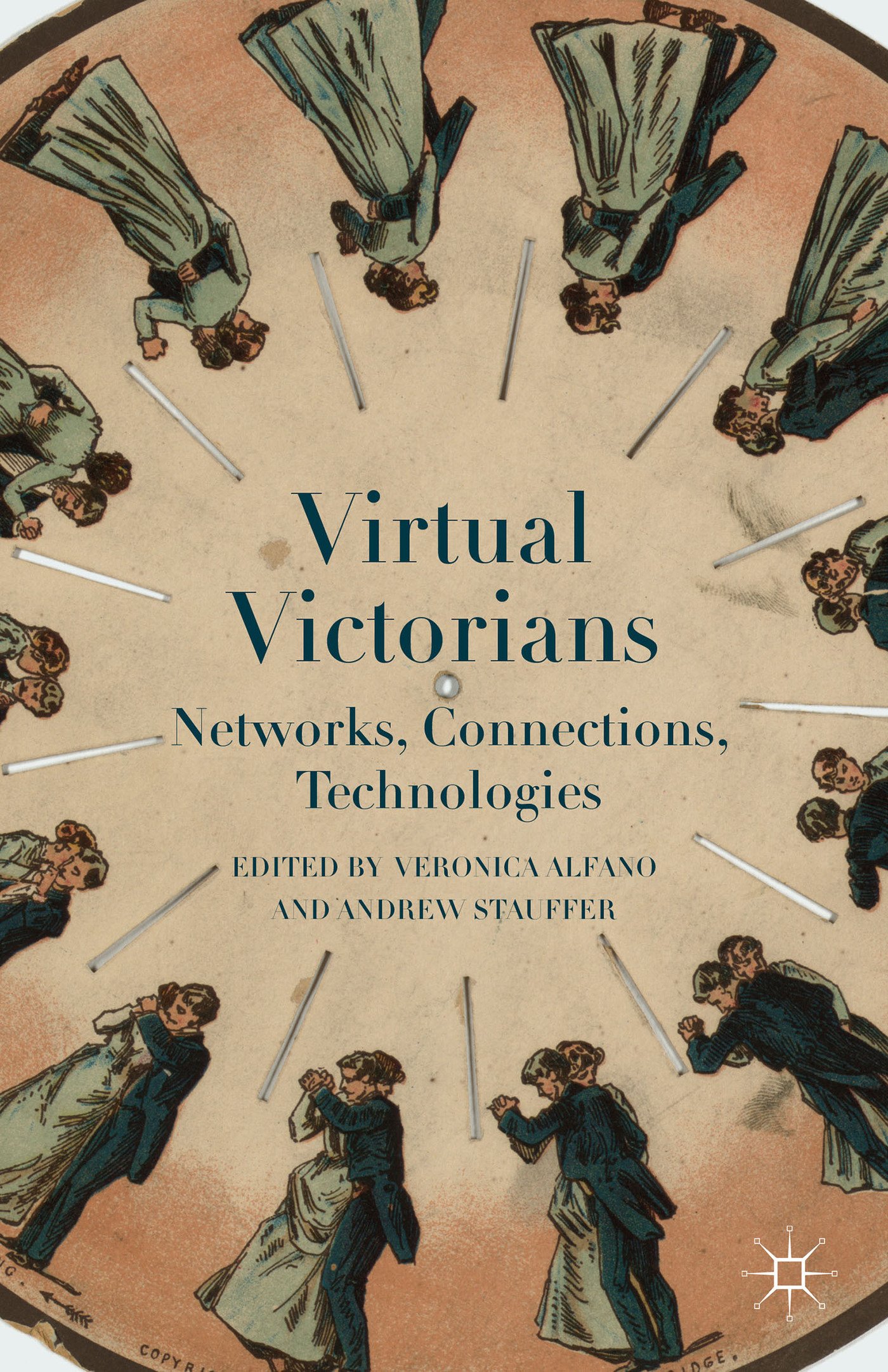 The following is an excerpt from my article “Viral Textuality in Nineteenth-Century US Newspaper Exchanges,” which is forthcoming in Vernoica Alfano and Andrew Stauffer (eds.), Virtual Victorians: Networks, Connections, Technologies, May 2015, Palgrave MacMillan. Reproduced with the permission of Palgrave MacMillan. The article draws on the findings of the Viral Texts Project at Northeastern University.

In the Rossetti Archive, Jerome McGann seeks to represent the “social text” by including all editions of a given work in an online archive, rather than simply the “Reading Text” and “Variorum Text” of the standard critical edition. However, even the social text model remains focused on discrete works—books, most often, though also stories or poems—that can be collated and compared as distinct entities. Virality is messier, aligning fragmentary texts and textual echoes not only through books but also through ephemeral and hybrid media; the latter of these is exemplified by the nineteenth-century newspaper. The “viral text” of a particular poem would include official and unofficial reprintings, but also parodies, quotations, reviews, paraphrases, allusions, and more—what Julia Flanders has named “reception items.” A theory of viral textuality must wrestle with unusually capacious ideas of “the text,” including in its purview the continually shifting penumbrae of readers’ responses that testify to that text’s life within culture(s).

For this reason, virality proves especially useful for thinking about how texts circulated in the increasingly complex mass media ecology of the United States during the nineteenth century. During this time, newspapers and magazines proliferated, and this rapid expansion of the print sphere was accelerated by a system of content sharing among publications. The periodical press in the United States depended on “exchanges,” through which editors subscribed to each other’s publications (paying little to no postage for the privilege), and borrowed content promiscuously from each other’s subscriptions. Texts of all kinds were reprinted—typically without authors’ or publishers’ permission—across books, newspapers, and magazines. Content shared through the exchange system was not protected under intellectual property law. Instead, periodical texts were considered common property for reprinting, with or without modification—much as articles, music videos, and other content are shared online today among blogs and social media sites. And as is the case today, antebellum content creators reacted in disparate ways to these sharing practices. Some writers and editors compared reprinting to theft, decrying a system that popularized writers’ work without supporting them financially. Others exploited the reprinting system in order to build a reputation that could be leveraged toward paid literary employment.

The spread of “viral” content in nineteenth-century newspapers depended on a range of factors, from the choices of editors to the preferences of readers to the material requirements of composing a given day’s issue. The frequently reprinted listicle “Editing a Paper,” for instance, lays out the dilemma that faced nineteenth-century editors considering whether and how much to reprint:

</a>If we publish telegraph reports, people will say they are nothing but lies. If we omit them, they will say we have no enterprise, or suppress them for political effect . . . If we publish original matter, they find fault with us for not giving selections. If we publish selections, folks say we are lazy for not writing more and giving them what they have not read before in some other paper. (11 July 1863)

The first reprinting of “Editing a Paper” identified by the Viral Texts project appears in the Big Blue Union of Marysville, Kansas, but even here an editorial preface claims that the list has been “going the rounds of the papers. If we knew in what paper it first appeared,” the editor continues, “it would afford us pleasure to give the writer due credit.” This piece and its preface illustrate much about editors’ and, presumably, readers’ attitudes toward reprinting, and how those attitudes might line up with modern ideas of viral media.

Considering nineteenth-century newspaper snippets as “viral media” allows us to frame their spread in terms of “rhetorical velocity,” a term first developed by Jim Ridolfo and Dànielle Nicole DeVoss to describe online composition practices in which writers take reuse and remixing as a given and compose with an eye toward facilitating such reinterpretive acts. Such writers take as their primary assumption that a piece will be recomposed by others—reprinted or otherwise remediated. Ridolfo and DeVoss propose that “when academics uphold distinctions between author and producer, we are left in an uncomplicated, often acontextual space that does not provide the tools we need to best negotiate the ways in which production and authorship become more slippery in digital spaces and within remix projects.” They argue, “The term rhetorical velocity means a conscious rhetorical concern for distance, travel, speed, and time, pertaining specifically to theorizing instances of strategic appropriation by a third party.” In other words, “rhetorical velocity” posits “the text” through multiple dimensions, charting its uses and movements—both social and geographic—alongside its evolving content. What’s more, a piece need not be consciously crafted for a wide audience to have rhetorical velocity; if it is compelling, concise, and easily modified, then it can go viral with or without its creator’s knowledge.

While Ridolfo and DeVoss refer specifically to composing practices online, the frame of rhetorical velocity offers insight into widely reprinted newspaper content during the nineteenth century. Nineteenth-century editors relied on the exchange system to provide engaging content, and they in turn composed (or solicited) original pieces with an eye toward their readers and those of the papers with which they exchanged. In the first post–Civil War issue of the Pulaski Citizen, for instance, editor Luther W. McCord apologizes for the sorry state of “The News” in the paper because “we have no exchanges yet, from which to make up our news items. Our readers can readily appreciate,” the squib continues, “the impossibility of making an interesting paper without something to make it of.” McCord then assures readers that they “hope to have a full list of exchanges by next week and, per consequence, a more readable number of the Citizen” (January 5, 1866). This apology echoes a common notion among editors in the period: newspapers that aggregated content from exchanges were of higher and more consistent quality than newspapers written entirely by locals. In other words, McCord assumes that his primary job will be selecting and propagating writing from elsewhere—contributing to the rhetorical velocity of content written for a distributed network, not for individual newspapers.

We must therefore assume that newspaper editors and writers were concerned with the rhetorical velocity of what they published; a newspaper whose content was regularly reprinted in other newspapers would soon be added to more exchanges, as editors further down the line sought the source of the pieces they encountered in intermediary papers. This would, in turn, increase the popular newspaper’s circulation and subscription fees. Indeed, when considering nineteenth-century newspaper snippets, we might speak of “composing for recomposition” in a more technical way, using “composition” not only in its modern sense, as a near synonym for “writing,” but also as a printers’ term of art. As scholars such as Ellen Gruber Garvey have shown, texts were reprinted in newspapers to help editors compose entire daily or weekly newspapers with small staffs. “By yoking together scattered producers who shared labor and resources by sending their products to one another for free use,” the network of newspapers sustained the proliferation of its medium. In other words, reprinting existed in large part to meet the material needs of publication. Many of the changes introduced into texts as they circulated through the newspaper network—a line removed here, two lines added there—were motivated by these practical considerations, as a given newspaper’s compositors shaped exchange content to fill empty spaces on a nearly composed page. It seems reasonable to presume that as a newspaper’s compositors prepared their pages each day or week, they expected—perhaps even hoped—that other compositors in their exchange networks would later recompose their texts, extending the texts’ rhetorical velocity to reach distant audiences.

To read the rest (along with fantastic work by other C19 scholars), preorder Virtual Victorians.